Are you trying to choose the right variety of apple for your needs? There are many to choose from. There are heirloom varieties that have been around for hundreds of years and apple growers are constantly creating new varieties to meet consumer tastes and 2022 is no exception. Scroll down this page for a table of dozens of apple varieties including photos and their characteristics and best uses. This page has tips about harvesting and storing apples. And if you bring home some apples and want to make applesauce, apple butter,apple juice, apple pie, apple cobbler, apple crisp, even apple cider, just click the links for each to follow directions and recipes or see this page see this page for a master list of simple, reliable, illustrated canning, freezing or preserving directions. There are plenty of other related resources, such as this list of local regional and apple festivals - click on the resources dropdown above.

What's in season in October 2022, and other timely information:

Notes for October 2022: Summer is almost over and that means apples are here (see this new page for Apple Orchards in your area!), and except in northern areas, peaches and blueberries are finished. Some crops continue until frost, like raspberries, blackberries, figs, corn and tomatoes. Check your area's specific crop calendar (see this page) and call your local farms for seasonal updates.

See these pages to find a local Apple festival, and other festivals. We have a guide to apple varieties and a guide to peach varieties. Also recipes, canning and freezing directions for apples, tomatoes, corn blueberries, peaches, etc.

See our comprehensive list of easy home canning, jam and jelly making, preserving, drying and freezing directions. You can access recipes and other resources from the drop down menus at the top of the page or the site search. If you have any questions or suggestions, feel free to write me! It is easy to make your own ice cream, even gelato, or low fat or low sugar ice cream - see this page. Also note, there are many copycat website listing U-pick farms now. They have all copied their information from here and usually do not ever update. Since 2002, I've been updating the information every day but Christmas; so if you see anything wrong or outdated, please write me!

Children's Consignment Sales occur in both the Spring and Fall See our companion website to find a local community or church kid's consignment sale!

2022 looks to have apples ripening on their normal schedule. There have been few late frosts in the main apple growing regions, rain and temperatures have been good, so the year is shaping up well for a good apple crop. It's too early for prices, but I expect most areas to see $14 to $30 a bushel, depending on variety! Scroll down the page to see the chart, or click here for a PDF print version. And for an explanation of why apple slices turn brown and how to stop it, see this page! To see how to properly store apples for the winter, see this page!

Varieties which are exceptional for a trait are noted in the chart below (Best, very good, etc.). Varieties which are at least good and well-suited have an "X" in a column. A blank box simply means that they are average for the quality. Ultimately, it is personal preference and cultural traditions. that often determines which varieties of apples are used for which purpose. That said, sweeter and softer apples make the best applesauce (like Gala), harder, drier apples are often used for baking and storing (like Rome and Arkansas Black), and tarter, more crisp and juicier apples are often eaten fresh (like Honeycrisp). 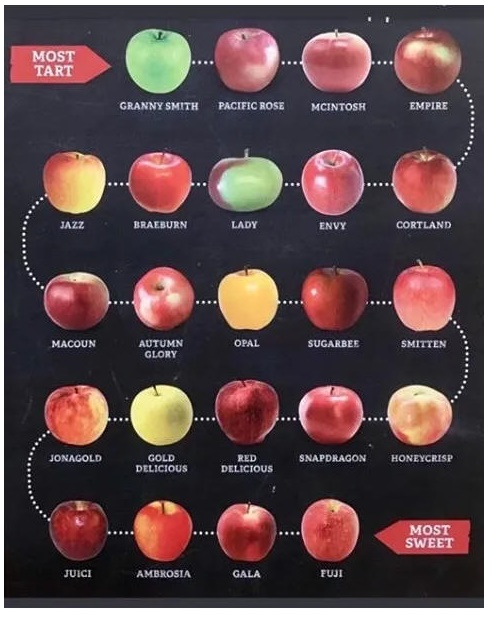