Apples: Why Are Some Brown Inside (But look Good Outside) - PickYourOwn.org

When fruit and vegetables are normally available and ready to pick in United States!

Looking for Apples: Why Are Some Brown Inside (But look Good Outside) in 2022?  Scroll down this page and  follow the links. And if you bring home some fruit or vegetables and want to can, freeze, make jam, salsa or pickles, see this page for simple, reliable, illustrated canning, freezing or preserving directions. There are plenty of other related resources, click on the resources dropdown above.  If you are having a hard time finding canning lids, I've used these, and they're a great price & ship in 2 days.

Apples: Why Are Some Brown Inside (But look Good Outside)

Apples: Why Are Some Brown Inside (But look Good Outside)

Have you bought apples (especially Fuji) that look great and when you get them how and cut them open, you find they are brown or have brown spots inside?  This is becoming a more common problem, and unscrupulous (or simply incompetent) middlemen may be at the heart of it.  It has to do with how the apples are stored after they are harvested.

If the apple looks great on the outside, no brown spots, blemishes, etc. - but is brown inside

In this case, the most common problem is due to how the apples were handled in storage after being harvested.  UC Davis tells us:

Internal browning, thought to result from CO2 injury, has been reported in Fuji, Cox's Orange Pippin, Braeburn and Jonathan apples. The disorder is associated with later harvested, large, and overmature fruit and with CO2 concentrations in storage. Higher concentrations of CO2 result in greater incidence and severity of internal browning. Incidence and severity of this disorder varies season to season and orchard to orchard. The reasons for this variability are unknown but some have suggested an association with cool, wet weather and high nitrogen fertilization. 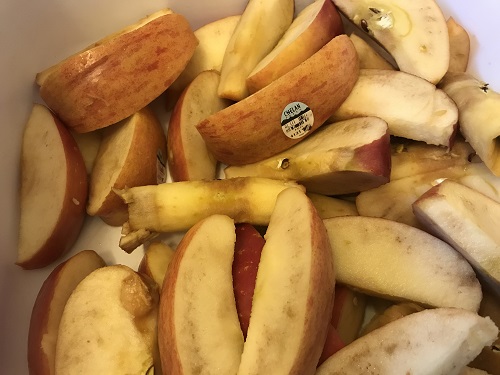 This makes sense to me. I bought 3 bushels of Fuji's in late September 2019 at the farmers market.  They were exceptionally large (the size of softballs or grapefruit), and looked and felt perfect on the outside.  When I cut them out, 1/3 to 1/2 of them looks like this:

When you look at this photo, understand that I took this picture with 90 seconds of cutting these apples.  This is NOT due to air exposure, where apples brown after being cut and exposed to oxygen. That takes longer than a minute or due, this is how the apples look the moment they are cut open.

I cut a piece of the white portion of one of these apples and tasted it.  It had a mealy, mushy texture and tasted bland.. not bad, but simply flavorless.

The degree of browning varied from faint brown to quite dark.

Empire and McIntosh apples and presumably, Fuji, are susceptible when they are stored for too long in cold temperatures. It looks a lot like the browning caused by CO2issues (shown above), affecting the core and flesh. A key difference is there is no clear boundary between the afflicted flesh and the undamaged areas; they blend together. U of Maine says that it occurs more frequently when the apples are harvested late (for the variety)  and a storage compound, 1-MCP, is used.

The University of Maine has a page that shows and explains several apple browning problems, including "Soggy Breakdown.

Soggy breakdown is an internal chilling injury that develops when susceptible varieties of apple are stored at a temperature below their tolerance. For Honeycrisp, temperatures below 37ºF can induce this disorder. Browning develops in the outer cortex. Severity of symptoms range from small brown spots in the cortex to a complete ring of browning around the entire apple that usually does not extend to the skin. There is usually ring of unaffected tissue just inside the skin. In Honeycrisp, it often co-occurs with soft scald. Conditioning the fruit before placement in cold storage does not consistently prevent soggy breakdown and in some cases, can make it more severe. It is recommended that Honeycrisp be stored at temperatures of 37 to 38ºF. 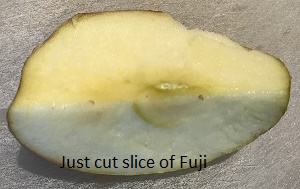 Compare the CO2 issue above with ordinary browning , or "enzymatic browning." When you cut open an apple, the flesh is first now exposed to oxygen. An enzyme in the apple called polyphenol oxidase (PPO) starts to  oxidize compounds in the apple's flesh called polyphenols.

The oxidized polyphenols are transformed into "o-quinones" , which then react with amino acids in the apples to produce the brown color.

Some apple varieties have more of the enzymes and the polyphenols which means they brown more.  Some new varieties have been bred to have lower levels of these compounds and stay white after cut. The browning does not affect flavor or even texture.  Sure, if you leave cut apples out for a day 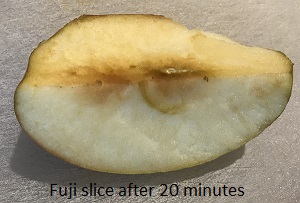 , that would, but that's due to actual rotting, not a simple enzymatic color change.
This enzymatic browning also occurs in other fruit, most noticeably bananas, pears and eggplants.

If you want to keep enzymatic browning to a minimum, see this page for simple tips that work!

At right is a photo of ordinary air-exposed browning, top a fresh cut Fuji apple and bottom the same slice, 20 minutes later.

See this page for a time lapse set of photos showing how an apple slice browns once cut.

Both slices are perfectly fine to eat!

Other causes of apple browning problems

If a female apple maggot lays an egg in a growing apple, it leaves a dimple or small spot where the egg is laid. Once the egg hatches, the maggot eats some of the apple flesh. This causes brown spots inside the apple.  The apple maggot leaves the apple (so you won't find one inside, just the brown damaged flesh).

Bitter pit shows up as recessed small brown divots in the outside surface of the apple, sort of like the dimples on a golf ball, but dark brown in color. There are also brown spots inside the apple's flesh. It is caused by a calcium deficiency in the fruit and can appear while the fruit is still on the tree or appear within the first month or two of cold storage.  Most susceptible varieties include Honeycrisp, Northern Spy, Gravenstein, Grimes Golden, and Baldwin and to a lesser degree Golden Delicious. Red Delicious, Gala, and Winesap and more resistant. See this page for photos.

Another chilling disorder that affects Honeycrisp, Golden Delicious and McIntosh apples when they are stored at temperatures below their tolerance. It looks like a blister or light brown discoloration of the skin and then can become dark, affect the flesh beneath and eventually produce fungal decay.

This damage DOES affect the outside, causing visible browning when certain apple varieties are stored longer than three months in cold storage. Brown splotches develop on the green side of the apple, and will continue to grow in size when the apple is held at warm temperatures. It is also associated with early harvest date. Cortland, Red Delicious, McIntosh, and Granny Smith are most susceptible.

This is simply due to the apple being too old, stored for too long. How long is too long varies from one variety to the next. Fuji's store well, but Macoun shows signs with 2 months. All varieties will eventually develop senescent breakdown if stored long enough. Commercial apple stores use the proper temperature (which is specific top each variety), harvesting at proper maturity, a controlled atmosphere (e.g., CO23 levels) and, in some cases the use of a compound called 1-MCP to delay it.

What can you do with browned apples?

If the apples look ok when you cut them, and start to brown only after being cut; they're fine - THAT IS NORMAL!

But for the apples that are brown inside when you cut them open, there's not much you can do.  I wouldn't use them,  First off, they taste awful!  They may not be harmful to eat, but what's the point if they taste bad?

How can you prevent browning of apples at home?

The normal browning CAN be easily reduced or eliminated; see this page.